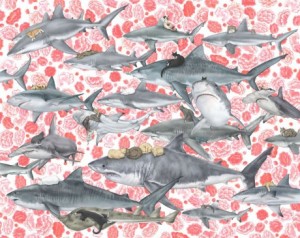 As a person with her roots in Kentucky—a state mainly highlighted in the national news for its basketball dynasties (Go Cardsi!), bourbon, and Mitch McConnell, I’d like to think I know a thing or two about arguing.

Scratch that. Pour me a glass of bourbon, hold the branch, fast forward a few weeks to March Madness or open up a can of pork barrel, and have yourself a seat: I’m a bona fide trash talker.

Since I’ve been in grad school, I haven’t really followed new music, thought as much about the political sphere, or (God help me) been as dedicated to following college basketball as I imagine I would were I to live in some sort of science experiment control group dedicated to finding how trash talkers spend their alone time.

But if I thought I was a good trash talker before just because of my geographic and natural predilections in that area of oration—take a look at me now! Grad school has taught me much in the art of kidding kidders, or, what outsiders might refer to as “bullshitting.” (Key words: conflation, Marx, Foucault, smarmy laughter, etc.)ii

Another thing that has really allowed me to amp up my game is the Internet. No longer do I need Cliff’s Notes, Rolling Stone, or some other such guide to tell me what I should think about when reading, viewing, or listening to art. I can readJezebel, The New Yorker Online, and The Onion to tell me how to feel about it, what’s funny about it, and even whether to like it or not. This saves me a lot of time, energy, thought, and enjoyment. Enjoyment is really not good for trash talking. Neither is over-thinking.

Which brings me to lists. And how everyone says they hate lists but secretly loves lists or at least clicks on them. As writers yourselves, I’m sure you know what I mean. They help us know what to like, who to envy, and what’s “good.” Because how would we know otherwise? They give us some good starting grounds for fisticuffs (especially if you’re a college basketball fan this year). And of course, because, as the mysterious they has told us for many moons, a kabillion books are published each and every year and no one reads books anymore.

So maybe, for lit blogs, the reasoning is to shepherd people toward the “good” books in an effort to make them love literature like when they were babies and their mothers served them warmed milk and beautiful Golden Books each night as they drifted to sleep under their Pottery Barn down comforters.

Yet this desire to love books and the reading experience directly conflicts with my inherent love of big talking.

When I’m reading, I can’t strut my list-swagger: i.e. What about your magazine’s design? Oh, well, “Sycamore keeps getting sexier and sexier.” And Lumberyard: Please: we’re disco cowboys on rollerskates. (Oh, hi, and thank ya kindly, Karyna McGlynn. Not shabby yourself!)

This sort of list is great for many reasons. It uses the word “sexy,” which means by some odd Google algorithm literary magazines, Madonna’s “Like a Prayer,” and a picture of Idris Elba in a tweed jacket could come up in the same Google search. This unites nerds like me with superstars with rippling muscles. By the transitive theory of something I learned in geometry, this makes nerds like me superstars with rippling muscles. (Nerds, everywhere, unite!)

It also has many of the magazines I love on one list. Forklift, Ohio, anyone? This list is cleverer and better-written than many other lists, too. I even genuinely like the work of the writer who made up the list.

But, as a nerd, I have to say, You’re killing me, Smalls (and by Smalls, I mean, Internet).

As casual diners, I think we all know what that meansiii: They can occasionally be helpful, but are mostly for entertainment value. And after reading them, I have the same problem I had before reading them: I still haven’t eaten.

When I read a list, I’m not shoving my nose into a book. And that would make the list-makers of the world quite sad, I think. Because while the intention of a list seems to be pure, and often a celebration of Things to Love, it really just lights up the parts of my brain that are argumentative and like to play beer pong. Yes, lists are fun in the way beer pong is fun: yes, but you always go one too many rounds, say something silly, and live to regret it. This kind of fun is not at all fun in the way that actual reading is fun and singular and has nothing to do with a party. What is fun (for me) about reading is that it charges the parts of my brain that are shy and warm and say please and drink Ovaltine before lugging a precious hardback up the hill home from the library. I imagine sometimes this fun involves crying into one’s Ovaltine and trash talking Raskolnikov.

So how is it, in the blogosphere, I come down so hard on lists? A self-proclaimed trash talker trashing a conduit of trash talking—slow down, Pancho, the irony’s not lost on me.

The answer: I don’t come down so hard on lists.

Sycamore has featured lists on its website. I’ve written lists for other websites. I keep lists to cross things off so I can later one up people about all the things I’ve accomplished and all the groceries I’ve bought and all the books I’ve read. I’m a Type A personality living in a Type B world and lists help me from developing a nervous tic.

But, the difference here seems to be these are my own lists: made self-sufficiently and privately. On the off-chance I choose to share them, no one actually listens to my opinions on books or movies or albums anymore (I have to believe in a time when my friends used to) because I don’t post these lists to the Internet. Even weirder, some of my friends have started to question their own judgment about books because their most dear aren’t on lists and their god-awful would-rather-eat-sand-than-read-that-agains shine at the top in November. (I don’t wish anyone December publication if they have any desire to make it onto a “Best Of” list.)

Aside from my general hard-headedness, which I already warned you I come by naturally, there is also the large part of me that wonders whether, much like graduate school, these lists offer fodder for fellow Internet trash talkers (Like me!) rather than actually convincing people to read great magazines and books.

Lists like these generally make us explain the purpose or urgency of art—like good art has some utilitarian function. And if so, that function applies directly to people trolling BuzzFeed: Top Ten Books to Read in the Recession! Top Twelve Lit Magazines with Kittehz! POETRY MAGAZINE CAN HAZ CHEEZBURGER?

I don’t think this is bad. I adore kittehz on a roomba just as much as any red-blooded American. Yet, isn’t it likely that the list gets more air time, more clicks, more discussion than the magazines themselves do combined? It’s not the publicity, the lists, or the list-makers that are bad. It’s that as readers we’ve forgotten how to use them. Or at least sometimes I have. This forgetting makes me feel lots of nerd shame. Eighties Madonna would never want to be seen with posers (unless, of course, they were Vogueing).

If you’re still conflating your identity with your adherence to Marxism, check out a copy of a sexy magazine at the local library or request that your library buy a subscription and benefit your whole commune. But if you’re a good little capitalist, why not buy one of the books or magazines—Might I suggest a Sycamore?—on that list? After all, Put your money where your mouth is has always been a trash classic.

Feel free to use the comments section to post your favorite renditions of “Vogue” from YouTube, or your thoughts on lists, trash talking, or basketball.

If you are wondering, the Louisville Cardinal has teeth because the University of Louisville has an excellent dental school. (And also because, as a small bird, it would just be ridiculous to claim a wildcat as your arch enemy if you didn’t have some sort of serious defense mechanism.)

I’m not saying great literary theorists do this—they notice nuance, they work directly with texts, I know a great deal of those folks too—but there’s not much I can learn from them about trash-talking.

I’d like to take a moment here and note that I am not one of those folks who doesn’t believe in the hierarchy that lists promote, and I love marketing—you should see me in a grocery store. Which wheel of cheese shall I buy? is a favorite question answered only by smell, ornate packaging, and twenty minutes of discernment before I realize I cannot afford the largest, most ornate, delicious-smelling cheese.