We’re thrilled to announce that “What I Mean When I Say Elijah-Man,” by Geffrey Davis, has been selected by poet Nikky Finney to receive the 2012 Wabash Poetry Prize. We received hundreds of excellent submissions, and our weeks and weeks of reading only affirmed the vitality and breadth of the poetry under production in the US today. Congratulations to Geffrey, and thanks to all who entrusted their submissions to our care! 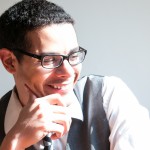 Geffrey’s poem, which will appear in the Sycamore Review’s Winter/Spring issue, dares to entwine issues of family and fealty with those of faith. We’re reminded that all hurt is necessarily verbed, always a “hurting” toward, and that only poise in the face of such driving pain makes poems. Even in our age of requisite cynicism, the poem affirms that skepticism can break the heart. All this in a handful of supple couplets? But how? Check out the full poem below.

We need also celebrate Kristin Robertson, whose poem, “Leaving Coins on the Mouths of Cadavers at Emory Hospital, a Defense,” was selected by Ms. Finney as the contest’s runner-up. Look for Kristin’s poem, Geffrey’s poem, and new work by Mary Ruefle, Angie Estes and others in our Winter/Spring issue.

Congratulations to all our esteemed finalists:

What I Mean When I Say Elijah-Man

And it came to pass, […] there appeared a chariot of fire

and horses of fire, and parted them both asunder; and Elijah

went up by a whirlwind into heaven. And Elisha saw it,

and he cried, My father, my father…

That Sunday in Chehalis, my father testified

and I watched as he wept before the pulpit,

his shoulders heaving, his hands

clapping up thunder above our heads,

the promise God had made in the dream:

to bring him Home before he tasted death . . .

to wake him with the scent of flowers, proof

of His presence. I learned to cry like that, as if

I could sprain the heart, the body hurting its way out.

But that morning my mind snuck

back to the nights he took paychecks and split,

sometimes for weeks, his head and body

humming for dope, his wife and kids

suspended by the boundlessness of waiting.

If he returned, if his pockets were empty,

if the locks had been changed, I’d watch

from the window as he jumped and hollered,

wide-eyed and ripping the gate from its hinges or

shattering the windshields of cars along our street

with his fists—how, as the sirens drew near,

not even God could stop him.

Geffrey Davis considers the Puget Sound area “home”—though he was raised by much more of the Pacific Northwest, and now by Pennsylvania as well.  He is currently a Ph.D. candidate in English at Penn State University, where he also teaches composition, literature, and creative writing courses.  He is a Cave Canem Fellow, recipient of the 2012 Leonard Steinberg Memorial/Academy of American Poets Award, and was most recently awarded a Graduate Residency from Penn State’s Institute for Arts and Humanities.  His poetry has appeared or is forthcoming in Crazyhorse, Mid-American Review, Grays Sporting Journal, Wisconsin Review, among other journals.  He is Co-Founder and Co-Editor of Toe Good Poetry and serves as an Associate Director for the Summer Institute for Literary and Cultural Studies.  He holds an MFA and is writing a doctoral dissertation on 20th- and 21st-century American poetics.

Kristin Robertson is a Ph.D. candidate in creative writing at Georgia State University, where she served as an editorial assistant for Five Points. Her poetry has appeared recently or is forthcoming in Alaska Quarterly Review, Mid-American Review, Smartish Pace, Greensboro Review, and Copper Nickel, among other journals.