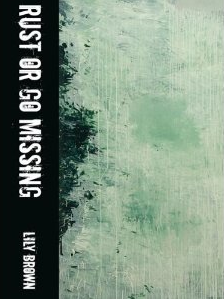 In a country and age without epics, we have only lyrics, each a minor hero that braves a domesticated and commodified world. Lily Brown’s first book, Rust or Go Missing, affirms the dangers of such a world, navigating the real hazards that hide in our postmodern (mis)understanding of the spaces we live in and live by. Each poem reminds us that, in such spaces, our speech is all that can condemn or save us.

Finding recourse in comic books and antiquated armor on display, these poems hint at the traces of the heroic and the extra-ordinary in our everyday. What works in these poems is a tension that arises from the Romanticism caught in the traps of quotidian rooms and quotidian love. In the book’s closing poem, “Museum Armor,” we find ourselves in an unsettling locus of fishtailed women, nuns, and Dalian clocks, the reality of which proves more disconcerting because it is unquestionable:

me a feeling. I thought
of nuns. The clock flashed

on the ceiling; time was
inside. I found you

under the owl-white
sky. I scratched the glass

with my eye. Tipped birds
over the red bridge.

The sun in my wall.
We slant. Speech

In such spaces, the tilted image of time in a watch face’s reflection on a drywall sky becomes an uncanny stand-in for the position of the sun in a blue zenith. This place is also an odd double, its construction (“my wall”) an unnatural substitute for a Romanticist self constructed from seasons. Our only way to survive in such places, Brown suggests, is to find a mode of “[s]peech” that “centers our backs.”

The pleasure of this poetry is the tumble-down logic one follows from line to line, across breaks and across poems. And this logic thrives because the poems realize themselves not as words on pages but as lyrics that explore and explode our relationship with everyday places, as in the following lines from “In the Shins”:

Comic books, electronics, shitty
substitutions for love. Shifty things
break off of me like a field

I lost my footing. Even language pivots.

Here, comic books and Platonic caves are equally at stake, even if equally reduced to “shitty” and “shifty,” so that what’s left for the speaker is a poetic space of unsure footing. But this also proves a place where the loose ground allows for the language to move, to “pivot.”

Brown’s poems, we find, are duplicitous. The places and lines we discover are always of two minds. And what fascinates is the interaction between these two minds, the gaps we spy between different layers, between the poems’ multiple frames. In “Transference,” we watch as the speaker watches a “serial drama” unfold on morning television, and we witness through the poem the ways in which the television frame also instructs and constructs us. By poem’s end, the speaker finally acknowledges to the television: “I’ve let you box my insides.”

These lines question how we look at the world and how that looking shapes who we are. We discover underlying harms, the subtle but pervasive forces that preside over the world without and within, ultimately turning both into something unfamiliar, or even something totally wrong:

[…] She wants to know the climate
of the room where I last wrote.
Was it the living room? Was it the staircase,
The memory of a staircase? I make a lie
of the absolute, space like a reflection
that never changes. And it’s space
she’s after. Space where she has me build
statements out of ignorance. Here are
the words. Here is a length, a pause,
a glance out the window
for effect. Here is the way I heard
toads in the woods, walked without
paths in the woods, saw a golden
golf course through the woods
and sneaking to the greens found everything
was wrong. Fake fountains in the watery parts…

(from “Backpedaling for Statements”)

I don’t miss out on what
I miss. You were right
about the future, a feeling
attached to now. Here,
my trick: accompaniment.
Trade the images for new stock.
You, lagging between too-close
and too far. First I was alone,
waiting, Then I was alone,
alone.