The translator’s note in this book explains how the title phrase “A Thousand Rooms” stems from a Dari expression that also means “labyrinth.” And indeed, in this short book Rahimi takes his readers through the tangled mind of Farhad, a Kabul university student, who in the course of one night finds himself a refugee in his own city, trapped in a stranger’s house, and unable to return home.

Through the dazed thoughts of Farhad, who is unsure at first of whether he is dreaming or awake, alive or dead, readers learn how he came to this stranger’s house, beaten so badly that he cannot stand or speak. The night begins with Farhad already crossing the taboo line, as he and his friend Enayat enjoy some drinks—an act forbidden to practicing Muslims. Trouble thickens when he stays out past the curfew imposed by Soviet invaders and is spotted by soldiers. Too drunk to remember the password and cheeky in some responses to the officers, Farhad is fiercely beaten and left in a ditch. A woman nearby, however, witnesses this event and brings Farhad into her home.

As Farhad revives, he learns about this woman who puts her life at risk to save his own. He finds that she is a widow, whose husband was killed in prison the year before. He learns that her husband’s family, to maintain their honor, pressures her to marry her brother-in-law. The woman was abandoned by her own family when she fled an arranged marriage to her deaf-mute cousin. She is left to care for her brother, tortured to insanity during his own prison stint. 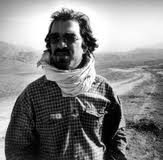 One point that initially interested me in this book was the claim that through his stay with the woman, Farhad is able to gain empathy for the oppression of Afghan women. However, I found his sympathies to focus only on the woman before him, for whom he is quickly building an attraction. Instead, I think readers are the ones who develop the empathy for these characters, and the people they represent, through the poignant depictions of those denied humanity simply for being on the wrong end of the political stick.

Farhad’s muddled thoughts are repetitive at times, the result of perhaps a few too many spins around the labyrinth. Yet his story is never confusing; though not told in chronological order, readers can still piece together the puzzle Farhad presents. What will further aid readers from confusion is a familiarity with Afghanistan’s political upheavals during the last forty years. The translator’s note provides a brief overview of this history, along with explanations of the historical names and Islamic terms throughout the book. These notes prepare readers to face a maze shaped by the turmoil of the characters’ crumbling world. Although there is no end in sight to their troubles, Rahimi’s characters still strive forward, searching for an opening that leads them out of the labyrinth of questions and fear and into a world with the sense that they seek.

A Thousand Rooms of Dreams and Fear
By Atiq Rahimi (Translated from Dari by Sarah Maguire and Yama Yari)
Other Press, January 2011
172 pages, $15.95

Afghan writer Atiq Rahimi is the author of two additional works: the novella Earth and Ashes (2003) and The Patience Stone (2010). His film based on Earth and Ashes won awards in many film festivals, and The Patience Stone received France’s Prix Goncourt award in 2008. Rahimi received political asylum from France in 1984 to escape the Soviet invasion of Afghanistan, but since the fall of the Taliban he has returned numerous times to his homeland to assist developing writers, including establishing a Writers’ House in Kabul.