I’ve mentioned UBU web here before, in particular their /ubu_editions page. Over the past few weeks I’ve been reading some of the books published there. In their newest release (the third series, Spring 2007), one name in particular stood out: Mairéad Byrne. I had not heard of her until I went to AWP in February and saw her at two panel events. She also happens to be a graduate of the MFA program here at Purdue. I guess I did take something worthwhile from that conference after all.

SOS Poetry, is best described as a collection: it is clearly not a work that builds off of a single design plan, or has intentions of being analyzed as a whole work. It is divided into several sections, and even within each section there is little cohesion. But this is something of the point, I think, because the book draws all of its poems from Byrne’s weblog Heaven from over the past five years or so: sort of a Best of Heaven; and weblogs are not designed for overarching consistency, which would aim for an effect of timelessness, but are organized around the timestamped post–which may build upon previous entries, but is more likely to follow the format of a journal or diary that demands the communication of a set progression of time.  There is something to be said too about a format that displaces the old in favor of the new.

I’m not much of a critic, really. I don’t have any witty comments coming to mind right now. All I can say is that these poems 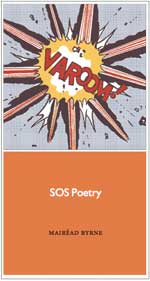 read with an immediacy and a sense of joy that are difficult to ignore. They display a great sense of humor and wit, drawing on forms and subjects as diverse as advertisements, letters, announcements, advice, movie pitches, and ideas for works for art. It is obvious, too, that Byrne is very keen to the pleasure and/or trouble in words and our use of them (see “Bonkers,” “Humidity,” and my personal favorite, “Alright”). Variously, this is a fun and engaging collection, and a pretty quick read, too, if you’re worried about how long it usually take to read a book of poetry.

Some of my favorites: